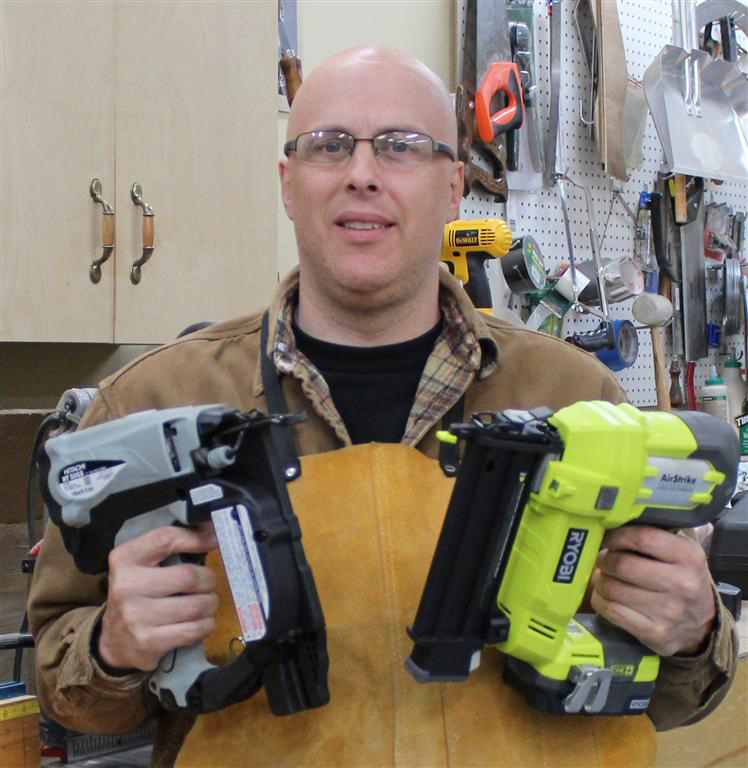 I have been a big fan of pneumatic nail guns for years, and like many woodworkers I have an arsenal of guns that can shoot anything from a tiny pin to nearly a railroad spike. I marvel at the power and precision of these tools, but like anything they have their downsides. For example, I have to wait for my compressor to fill before I can fire nails, enduring a wailing noise that could rattle my fillings loose. Also, while I am driving nails I need to contend with a tangled mess of air hose and try to not knock things over with it on my bench as I maneuver around the project positioning the nail gun. Then, if I am diligent I should drain the compressor after I have shot my nails for the day so that rust doesn’t build up in the tank and plug the draincock. In practice this just doesn’t happen often enough.

With these hassles in mind I have followed closely the development of cordless nail guns that have their own built-in power supply, eliminating the need for the separate compressor and air hose. I consider it a lofty engineering goal to incorporate this much nail driving power into a compact form factor that is light enough to use with one hand, and over the last couple years the tool manufacturers have started to deliver some great innovations in the area of cordless brad nailers. I wanted to take a look at a couple different options in this tool category (gas powered and battery powered), and examine some of the trade-offs in making a buying decision. 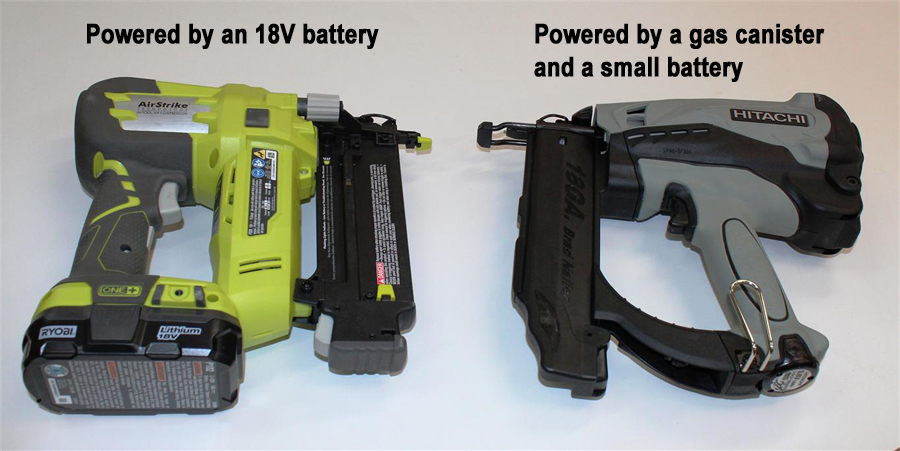 Both use a similar mechanism to drive the nail; a piston fires down onto a blade mechanism which propels the brad into the target material. The electric nail guns use battery-supplied electricity to propel the piston, while the gas powered guns use a fuel canister containing propane, butane and propylene that is sparked by a small battery to drive the piston in a manner similar to how a two stroke gasoline engine operates.

Both designs are impressive, but there are differences to consider before making an investment in one of these options. After spending some time with a nail gun of each type I can offer some observations about the areas where I found some differences: 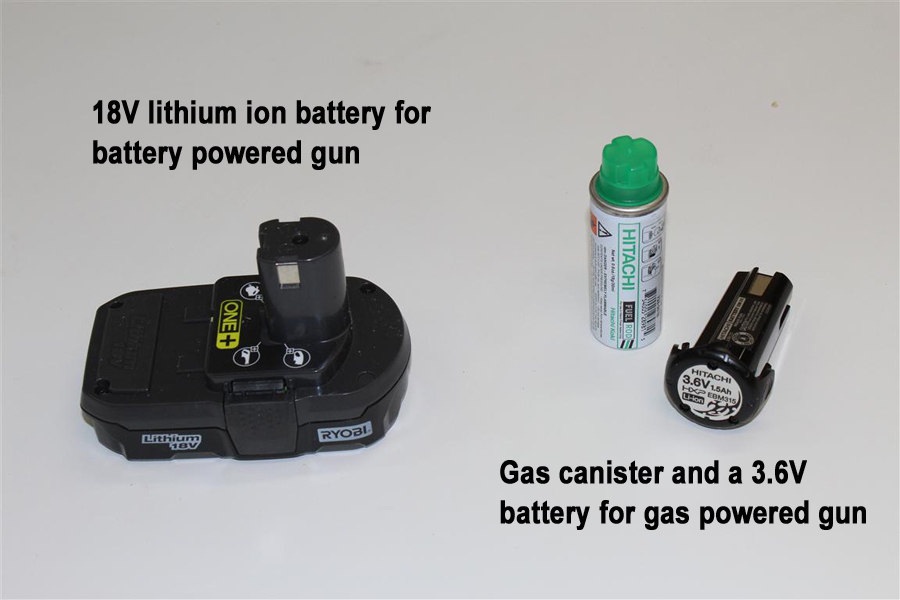 The battery powered units require a battery and charger much like a cordless drill or other battery powered tool. In fact, the tool manufacturers encourage us to buy into their “platform” and maximize our investment in a battery and charger by using it on multiple tools from their product line. This concept is simply brilliant, saving space, money and hassle with only one charger and a couple batteries rather than an entire cabinet full. Rechargeable batteries are convenient, and with lithium ion technology they are now lighter, charge faster and stay charged longer than ever. A full charge is reported to drive up to 700 nails on the Ryobi unit that I tested, which is more brads that I shoot in a typical year. More importantly for me, the lithium ion battery will stay charged for extended periods, which means that the nail gun will be ready to go when I need it. It’s pretty tough to beat that for cordless convenience.

Gas powered units rely on a fuel canister to deliver the nail driving power, and a small battery is used to deliver the spark. On the gas powered unit that I tested the lithium-ion battery is small and reportedly drives up to 2,000 nails on a single charge, and the gas cartridge is also small and drives up to 1,200 nails. That is great capacity on both fronts. The downside on the gas powered is that you have to purchase an additional consumable, but I was able to buy a 4-pack of canisters for about $25 which provides capacity for nearly 5,000 brads. I don’t believe that I have used anywhere near 5,000 brads in my entire 16 years as a woodworker/DIYer. So when I take that into consideration the price of consumables for the gun is negligible, and by having 3 backup canisters on hand I don’t anticipate running out of fuel at an inopportune moment when my local home center is closed and I can’t drive any more brads until morning. Another minor downside is the slight odor given off by the fuel which is only slightly bothersome and remained localized without permeating into the house from my attached shop. 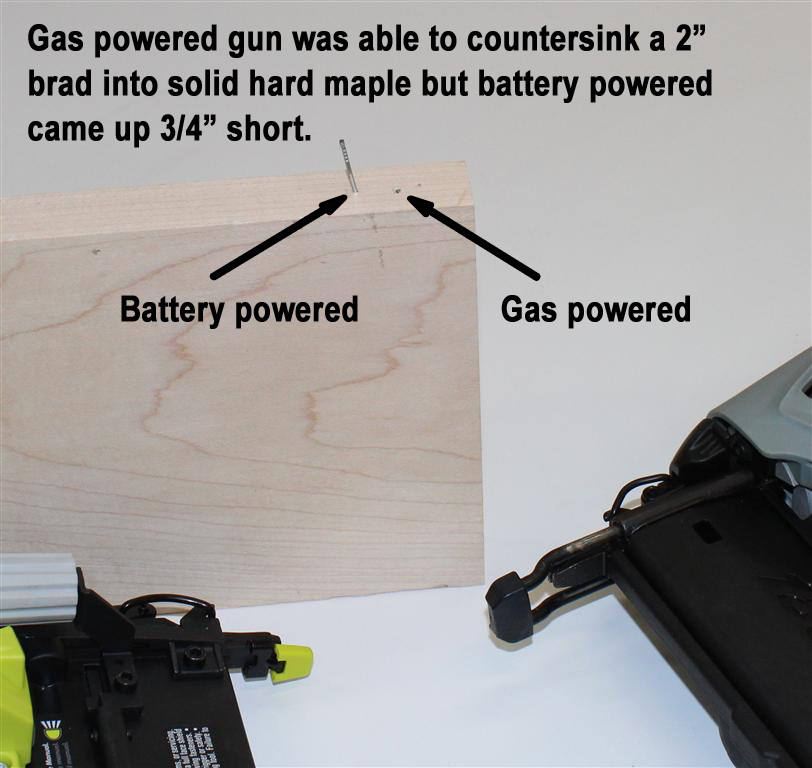 While I found the gas powered gun to have more nail driving muscle, I should qualify this up front by saying that either gun has the capability to perform any typical task that I have used a brad nailer for; installing trim, attaching a cabinet back, reinforcing a butt joint, etc. Either gun is capable of beautifully countersinking a 2” brad into a normal combination of hardwood/softwood/plywood. When I put the guns to an extreme test, however, of driving a 2” brad into over 2” of solid hard maple, the gas powered gun handled this with ease while the battery powered gun came up a bit short, leaving the nail about ¾” proud of the maple. Shooting brads into 2” of hard maple would be an unusual situation in my shop, but if it did arise I would need to accommodate the fastening requirement using another method. 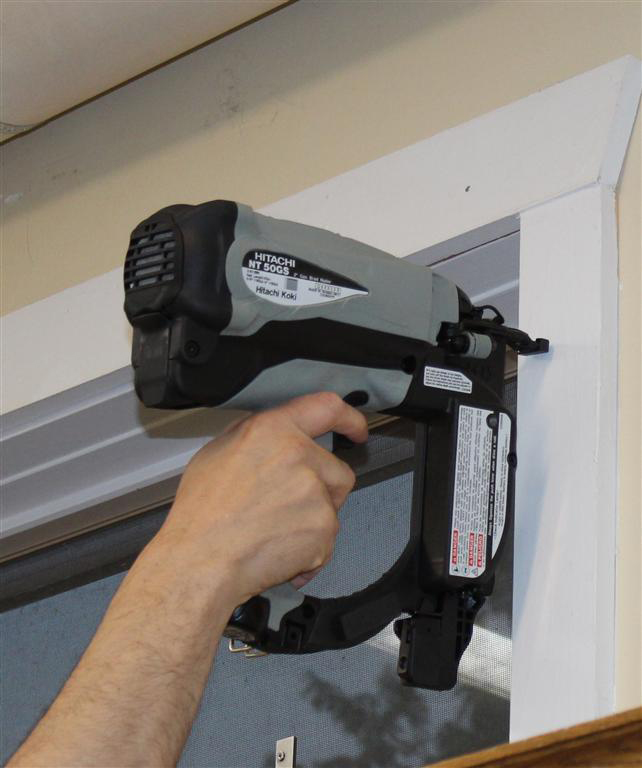 The gas powered unit that I tested tipped the scale at 4.4 pounds, and was easy to use for one handed overhead operations such as crown molding or trimming windows. For regular all-day use this would be a significant consideration for me, as the gas powered unit would greatly reduce user fatigue. The battery powered unit weighed 6.5 pounds, or nearly 50% more. For bench work this did not concern me at all, and for overhead nailing it was slightly more cumbersome than the gas nailer but not really problematic for light to medium use such as a normal trim job. I would not consider the weight a problem at all for my nailing requirements but a full-time finish carpenter who could spend a full day nailing crown molding in place might take this factor into consideration.

About the Cordless Nail Guns that I tested

Cordless nail guns are still somewhat of an emerging tool category, and a relatively small number of manufacturers have products in the market. I imagine that other tool companies are watching closely and fiddling with spreadsheets now to decide if/when they will jump in. To get a good representation of each category I brought in a gas powered gun from Hitachi and a battery powered unit from Ryobi. 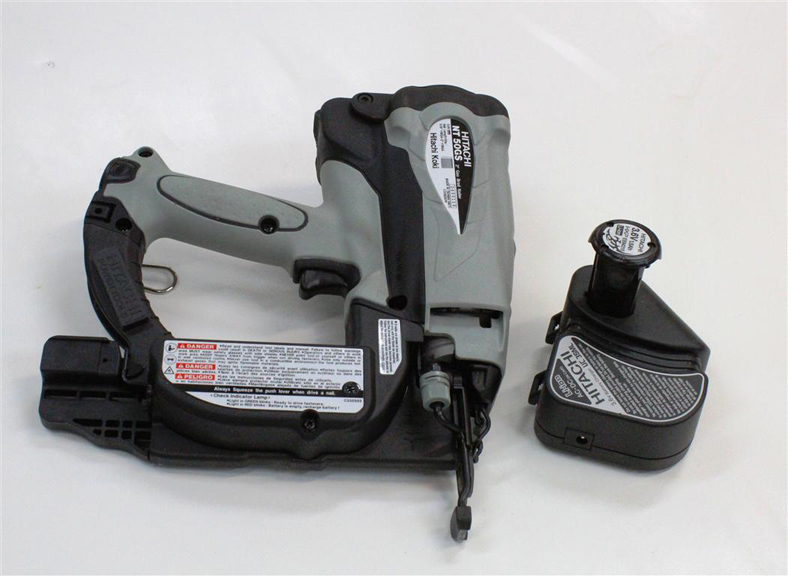 This gun shoots brads ranging from 5/8” to 2”, with a capacity of 100 nails. It offers a great ergonomic design, light weight for production use, and plenty of nail driving power for any application. There is no compromise in switching from a compressor powered pneumatic gun to this tool, and the power delivered by this tool is simply astonishing. 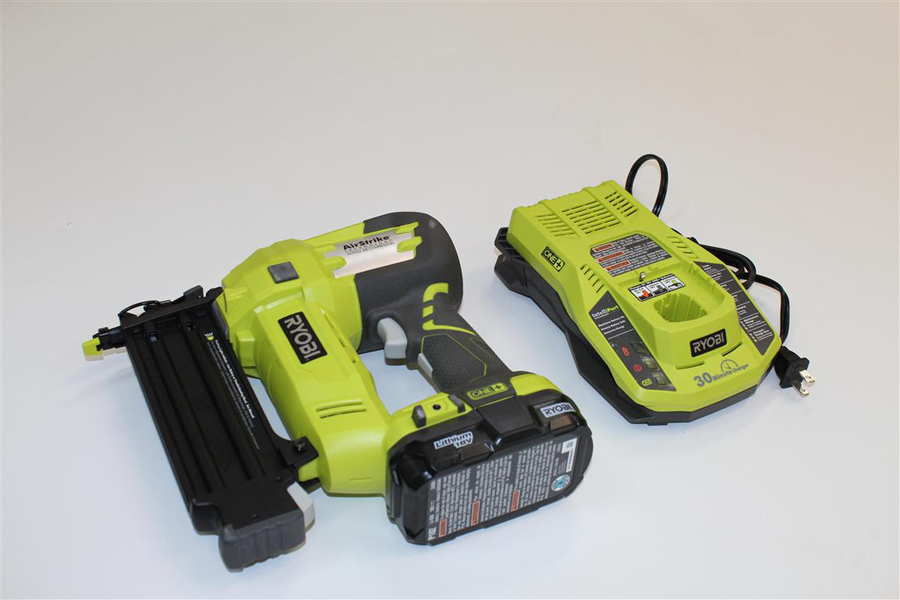 The Ryobi nailer also shoots 5/8” to 2” nails, and it offers a slightly larger capacity of 110 nails. It also has a couple nice bonus features such as an integrated LED light (I have gotten spoiled with this on my drills and router so now I love to see this on any portable tool) as well as a bump fire capability that allows sequential nailing by holding the trigger and tapping the nose of the gun onto the work piece, shooting 60 brads per minute. I admit that I was somewhat skeptical that a battery powered brad nailer could actually perform to my satisfaction, but this tool exceeded my expectations. Additionally, Ryobi offers over 50 other tools that work with the same battery, which is convenient. And in my case their marketing strategy worked; within 1 week after getting the nail gun I bought their 18V string trimmer and I am now looking at a leaf blower.

Cordless brad nailers carry a higher cost than their compressor-driven counterparts, but if you can justify the cost you will appreciate the convenience. Both battery and gas powered brad nailers offer a portability advantage over the traditional pneumatic gun, so choosing between these two types of guns depends on your own requirements.

What do you think?

Is there a cordless nail gun in your future? Which way do you think you might go; battery or gas powered?

29 Responses to “The Case for Cordless Nail Guns”