Woodworking adhesives are not created equal, and because of this I use several different glues, based upon manufacturer’s guidance as well as my own assumptions and experience about how each glue performs in certain circumstances. There are a number of criteria that help me decide which glue bottle to reach for in a given situation, but one of the key determining factors is how much time I need or want for a particular glue-up. The length of time between applying glue and the point at which work pieces should no longer be manipulated is known as “assembly time”. In some cases where assembly is simple and my goal is to get to the next step as quickly as possible, fast cure time becomes the key consideration. On the other end of the spectrum, when I have a particularly complex glue-up, I want as much working time as I can have.

I have generally felt that my assumptions about each of the adhesives that I use were accurate enough to guide my choice in each joinery situation, but being the geek that I am, I desired further quantification on this topic, so I set up a simple test to put some real metrics against my assumptions.

My goal was not to challenge the manufacturers’ claims about their advertised assembly times, but rather to use a consistent approach across all products in an actual shop environment to measure the relative assembly times across these adhesives. The key here is “relative”; there are many variables that go into determining actual assembly time in any given environment (temperature, humidity, wood species, grain pattern, glue coverage, clamping pressure, size of gluing area, etc.), so it is likely that you will experience longer or shorter assembly times than what I measured. I consulted a glue chemist for some guidance on framing the tests in a way that would isolate the necessary variables and produce reliable results.

I prepared 1” x 1” x ¾” thick squares of hard maple from freshly planed board to use as my test pieces, and I installed a hook into each one so that I could apply direct lifting force. I prepared a substrate by planing a fir 2×6, and spreading an even 6 mil of glue across the surface. Then I placed 5 test pieces into the glue, pressing each into the glue and ensuring good contact across the entire piece. 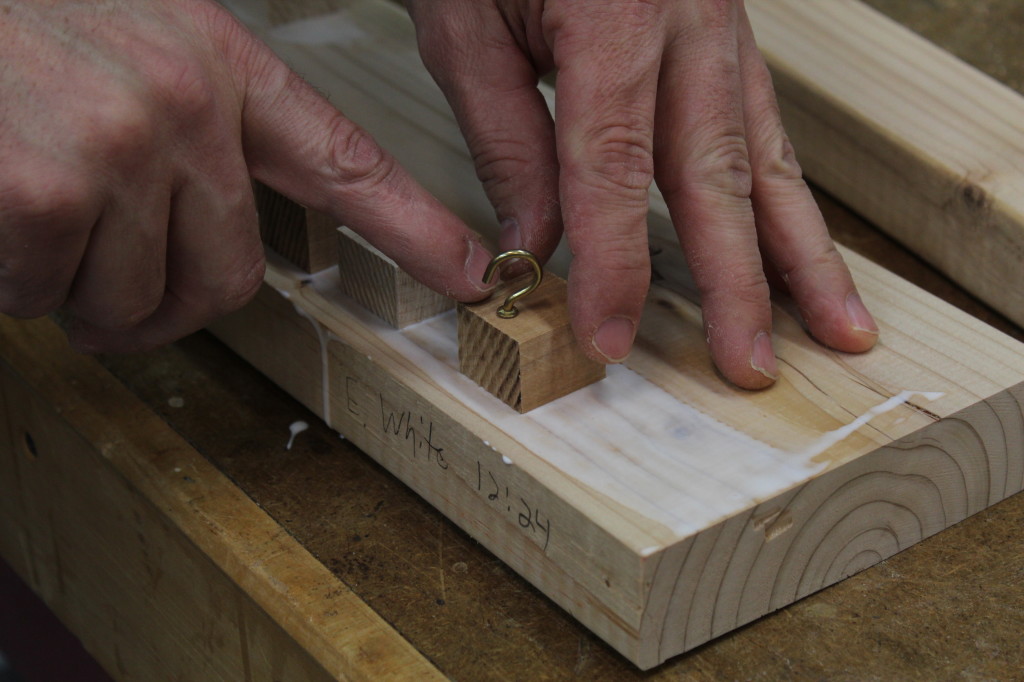 When the glue began to show signs of curing, I used a force gauge (a special scale designed to measure push/pull force on a concentrated area) to measure the amount of lift force necessary to remove the test piece from the substrate. When the required force reached 20 pounds, I considered glue to be cured to the point where further manipulation could not be performed to the test piece without affecting adhesion quality. This is a subjective measure based on observational data gathered during analysis that I performed prior to doing the actual tests, and this subjectivity is partially why the relative outcomes of these tests are more important than the absolute values.

I ran the test three separate times with each glue, and calculated the average assembly time value across the three tests. For the record, the temperature in my shop was 64 degrees, and the humidity was 33 – 35% during the two days that I performed the tests.

Because of the nature of the various glues that I tested, I anticipated a sizeable range of assembly times, but I expected the range to be in the order of 2-3X. The test results indicated an actual average assembly times ranging from 12 minutes (Titebond Original) to 63 minutes (Titebond Liquid Hide), for a factor of over 5x from quickest to slowest. 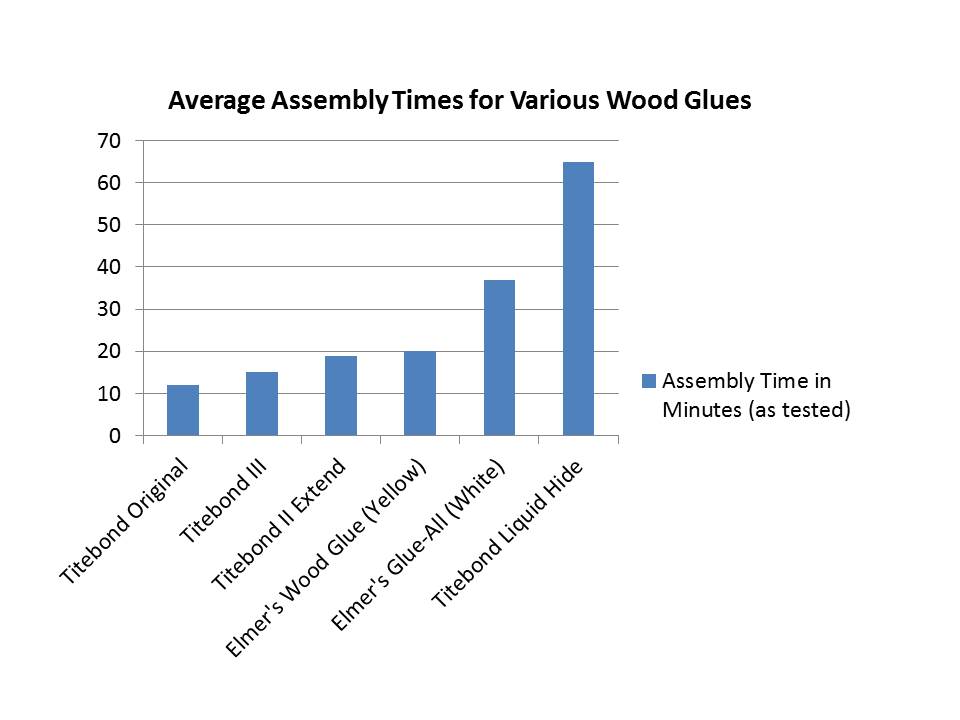 In addition to the broad range, a couple other things surprised me. First, I was amazed by the slow cure rate of hide glue. I knew of its reputation for extended open time, but never expected to see over an hour of workable time. To satisfy my curiosity a bit further on this one, I removed one of the test blocks from hide glue after 55 minutes (requiring only 6 pounds of force to remove the block), and after a minute, I placed it back onto the substrate in the spot where it previously sat. I let the piece sit overnight, and then tested it with the force gauge. It held solidly through the maximum 25 pounds that my force gauge can measure. Then I hit it with a hammer until it broke free, and I observed that it tore the wood fibers rather than breaking cleanly at the glue line. This indicated that that the glue was still able to form a bond that was stronger than the wood itself, even after being substantially manipulated 55 minutes into the glue-up.

The next surprise was the extensive assembly time of Elmers White Glue, coming in at an average of 37 minutes, and consistently exceeding 30 minutes in each of the three rounds of testing. I had heard that white glue offered longer open time, but I never realized that the difference was as significant as I found it to be.

– Titebond III has been my default glue for years because it is waterproof and approved by the FDA for food contact. Since my father and I make dozens of cutting boards each year, these attributes make it a winner in my shop. The 15 minutes of assembly time that it scored in my test puts it into the “just right” zone for most of my projects; enough time to assemble most joints at leisure, but not so long that it becomes a bottleneck in my work-flow. So for me, the test results do not suggest a change in my primary glue.

– Titebond Original will continue to be my “go-to” glue when quick setup is desirable, and the fact that this glue stood out as the fastest setting glue in this lineup did not surprise me.

– Based on an impressive open time of 37 minutes, Elmers Glue-All White Glue will become my new adhesive for complex glue-ups that require extended assembly times. Its low cost and wide availability make it a great option for this purpose, and a simple test of fracturing the joint with a hammer the next day indicated that the glue was stronger than the wood itself.

– Hide glue was the hands-down winner of the extended assembly time test. I will keep this in mind if an extreme situation comes about, but in most cases I don’t want to wait an hour for glue to set up, and the relative high cost and short shelf-life (6 months compared to 24 months for typical wood glues) make it a “niche glue” in my shop. However, I will pick up a bottle any time I need to repair an antique or apply a crackle finish.

When choosing glue for your projects keep in mind that there are many attributes to consider; ease of clean up, cure strength, sandability, water resistance, and durability to heat exposure. This article was designed to provide you with insight on assembly time only.