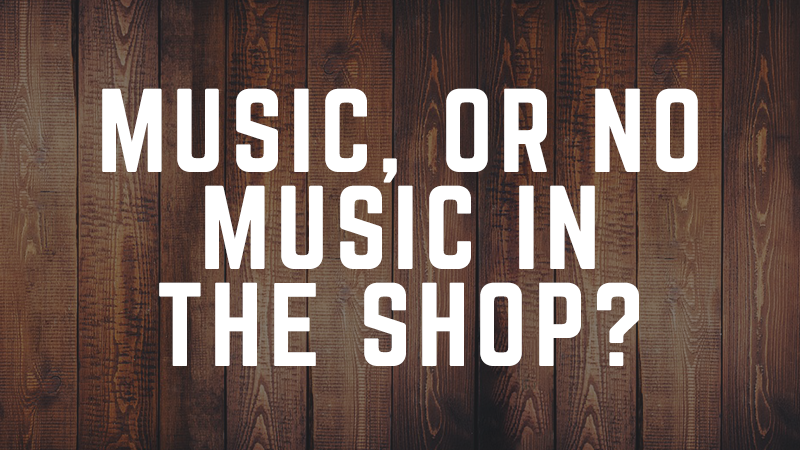 Wow! In answer to my question about music on or music off, turns out you love your music in the shop. Here’s what readers had to say:

As for the music in my shop, yup, 99% of the time. And it is always the same radio station, modified bluegrass.

Zeppelin & Steppenwolf for planing (machine) Shaping, Ripping, anything with the DC running.

Reggae & some Punk for Saturdays & we do bop around here. (Is “bop” still acceptable?)

And I know what you mean about it getting louder as you get busier. . . .oh yeah!

Every shop I’ve had (3) one the first things setup is the music. One place had a 2500 sf square room, I had 2 Ego’s (12″ woofer, 2 6″ mids, & an adjustable tweeter) & 2 Advents (the same as the Ego’s) 1 speaker in each corner with a TOA pre-amp out of a Emerson receiver that kicked butt. I could make sawdust dance when it was really cranked up. . .Now just have 2 old Realistic’s up in the ceiling. Sounds quite nice still. . . Not a concert though anymore.

Yes, George, I turn the radio on as soon as I enter the shop. We have a local station that plays Country/Western music. I don’t pay a lot of attention to the words of the songs, but then I catch myself singing a line every once in a while. The music does help take the tension off.

The radio is always on. Always working alone so it has become my companion, while in shop that is.

I vary between a local Jazz radio station and podcasts of various hosts on KGO news radio from San Francisco.

I listen to the classics most of the time. It’s more calming and isn’t something I have to pay attention to in order hear. Better to keep my mind on the job. I try to run the projects instead of letting the projects run me. The classics help with that I like to think. Ever try to do a really accurate fine piece to rap music???

I found I can get “Easy Listening” on my computer. Old Elevator Music uninterrupted. Suits me just fine.

Red Hot Chili Pipers (not to be confused with red hot chili peppers). Nothing like bagpipes playing AC/DC cover tunes at full volume to drown out the noise of my sander.

Keep up the good work George.

I’m definitely a “music man.” I have a stereo system in the shop most audiophiles would kill for in their home…well it’s old but it’s a good one anyway. Never once has the sound of the music drowned out the soft sound of my router.

I’ve been a woodworker for many years. The music in my shop is the sound of my machines and my barbershop songs running through the player in my mind. I’ve been singing barbershop for 20+ years and often sing softly while I work. I would listen to NPR if I had a radio in my shop.

I really appreciate the work and effort you put into the site. There always seem to be at least one article that strikes a chord.

My shop music by activity:

A) Generally making a mess (weekday): Country or light contemporary

B) Weekends: NFL or NASCAR on Sirius Radio

C) Cleaning up, sanding: “Song of the Volga Boatman”, Russian Army version. Either that or American slave spirituals.

My productivity in my shop would drop to nil without my music or something going on. I keep a FM radio/CD player going when I’m working. I’m a died-in-the-wool bluegrass fan, so I keep my Bill Monroe, Stanley Brothers, and other vintage bluegrass CDs playing most of the time. When I get tired of that, I’ll switch over to a conservative talk radio station for a while. In either case, I don’t play it that loud; just enough to hear it well when no machines are running, otherwise I couldn’t hear myself think.

Radio and I-Pod Nano and sometimes my old cassettes. Gotta have the rock and roll or nothing gets done.

I use a headset with FM radio.

I have the music on–using headphones to cover the noise of the vacuum system.”

Music on! Classical is best for me

2 Responses to “We Love Our Music”